It’s pretty and timeless, so it isn’t any wonder Vintage has become the hen trend of the moment. Covering everything from rockabilly to flapper girls, vintage style is the perfect hen theme for older and younger hen groups alike. What’s more, it stands the test of time, so when you look back on your hen do pics in years to come, there won’t be any cringing about what you wore or how bad your make up was.

If you’re after a fancy dress hen party, but don’t want anything tacky, a **pretty vintage hen do** is just the ticket. There’s also a whole host of **classic activities** to suit your vintage hen party style from **delectable afternoon teas** to a glam makeover where professionals will treat you and your girls to a great Gatsby or 40’s style beauty experience. Not sure what will suit you and your girls best? Check out our guide to classy vintage style-decisions, decisions… 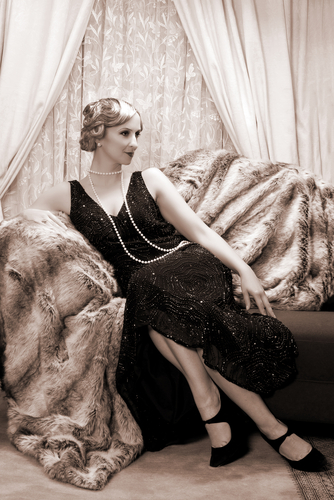 Probably one of the most sought after vintage hen trends, the flapper girl era of the 1920’s combines chic clothing with a sassy attitude, making it the perfect throwback for your hen party. The flapper girls were rebels of their time, wearing as much make up as they desired and being partial to a couple of drinks-or more-our kind of ladies!

If you and your girls want a fancy flapper girl themed hen, you’ll need to think dresses with dropped waistlines, plunging necks and backless clothing. To really get Gatsby inspired, don’t forget it’s all in the details- must-have accessories included strings of pearls, beading and long satin gloves!

The flapper girls were known for their thin brows, full on faces and dark make up. Think deep red lips and smoky eyes all framed with a bob. If you don’t want to commit to going for the chop, why not treat yourself to a wig if you want to go the extra mile?  Ringlets and curls were also popular so if you don’t fancy yourself with shorter tresses you can still get the look. All you need are a few ideas-our hen vintage team of experts can transform you in to a flirty flapper in no time with our makeover experience. 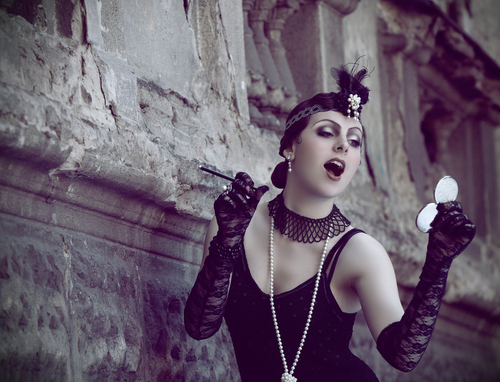 As the 1930’s descended, the flapper style disappeared, and in its place was a more refined and conservative style. At this time, a bit of good old fashioned Hollywood glamour crept in, as well as a love of luxe sports offerings. Think Bette Davis and Greta Garbo for style notes, and designers popular at the time include Lanvin and Balmain. Make like Ginger Rogers and flaunt your curves in a statement form fitting dress on your hen do, or go for an androgynous look like Marlene Dietrich if you’re more of a comfort dresser.

Some of the beauty brands we all know and love today were big players in the beauty game even back in the 30’s-Max Factor beautified some of the biggest stars of the era. Brows were thin and pencilled in, cream shadows were order of the day and lipstick was a staple in every girl’s make up bag (some things never change!)

Hair got a bit softer and more feminine during the 30’s-gone were the days of harsh cuts and structured looks and in its place were flirty waves. Most women still favoured shorter hair at the start of the 30’s, though longer flowing locks came in to fashion later on in the decade.

Pssst…Did you know? The 1930’s was the era of the depression for many people with the stock market crash of the late 1920’s hanging over the people. They didn’t have much money to spare but found solace in radio as it was one of the things they could enjoy for free. 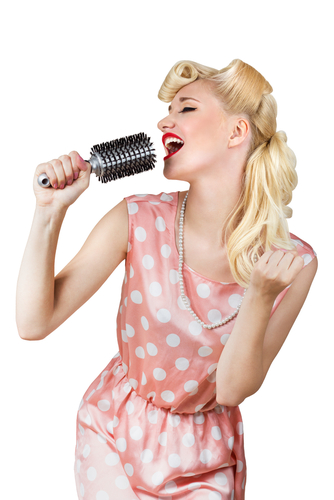 One of the best things about the 40’s was the style. The clothes were timeless and ladylike, and still influence many of the fashionistas we know and love today. The 40’s is the perfect dress up idea for a super flattering and easy to wear hen style. If you have a group of mixed ages, as well as both slimmer and curvier ladies, this is probably the best era to opt for as there’s something to suit every shape.

There’s nothing quite as pretty as a 40’s pin up look-think Joan Crawford and Ava Gardner for inspiration-Dior was a big fashion design influence in the 40’s so think French chic with full skirts and waist cinching jackets. The nautical trend really started to take off during the 40’s, as did florals. The classic pin up style was also in favour during the early 40’s.

The 40’s was home to the rise of the cat liner flick-one of the biggest beauty looks we still love today. Brows were defined, yet slightly less thin than the 30’s. If you’re a fan of a bright lip, you’ll love the 40’s beauty-this was the era of the red and orange pout! The 40’s was also the time of the glamorous victory roll hairstyle-definitely one worth trying out if you’re a lover of this moment in time!

Pssst…did you know? The pretty victory roll hair style is widely thought to have been named after a plane move in World War II. 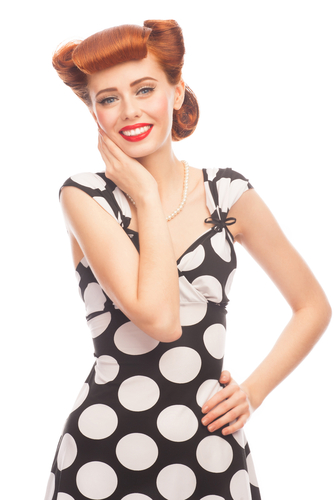 Heralded as one of the most notable trends from the era, the 50’s was the time of the rockabilly.  Retro style icon Elvis influenced fashion for both the guys and gals of the era and fashion became more accessible to the masses. Some of the era’s most influential style icons are still regarded as some of the most beautiful and inspirational women today. Famous faces from this point in time include Audrey Hepburn, and of course, the infamous Marilyn Monroe.

Grace Kelly was full of elegance, and the bikini (a 40’s invention) was seen on anyone who’s anyone including the ultra-chic Brigitte Bardot. The 50’s also saw a rise in Chanel’s popularity as they released their chic suit. If Chanel is high on your lust list but is a little out of budget fear not-you can re-create the look-think tweed, nipped in waists, below the knee skirts and of course, the classic tailored jacket.

The 50’s was home to ultimate glamour-the perfect style to take you from day to night on your vintage hen do. Lip liner became more popular during this era with most women opting for a poutier look, and powdered skin was the base of choice.

Eye make-up was light and pretty so if you’re not a fan of a dramatic look but heart a fluttery lash this could be the era to re-create.  Hair was worn rockabilly style by many-think longer locks with bandanas, curls, buns and bettie bangs.

To celebrate the launch of our sparkling new Vintage Collection we're giving one very lucky bride the chance to win a free vintage makeover in Brighton! Call 01273 225075 and quote Vintagehen for more info and a quote.

You can also check out our Vintage Collection board at https://uk.pinterest.com/Fizzbox/vintage-collection/