The Tinder Test: Which male stereotype won and what it says about you…

Blog » The Tinder Test: Which male stereotype won and what it says about you…

As you might have seen already, ourselves and Cosmopolitan teamed up to carry out an experiment on a little known dating app named Tinder, and now the results are in and it’s time to find out which male stereotype came out on top of the Tinder totem pole…

But first, for those that don’t know, let’s explain what we actually did:

I think we can all agree that there are 5 main male stereotypes that stand out above all others in this day and age (and that are also stumbled upon when swiping on Tinder). You have the traditional lad’s lad, the preened metrosexual, the brooding rocker, the bulked-up gym buff and of course, the hipster that knew about EVERYTHING before you did… can you pick out who is who below?

With Tinder essentially being the single world placed on an app, it was the perfect place to find out who ruled the roost – using the amount of ‘matches’ to decide a winner. Would the metrosexual show a sign of the times and win… and is the ‘bit of rough’ the rocker embodies dead forever? Being a true scientific experiment and all, everything had to be on point. I mean what if the hipster guy was simply more attractive than the lad? Surely that’s unfair, right?

Well not if you use the same guy for each stereotype – and that’s exactly what we did. Enter Jonjo, our very own guinea pig and the face of 5 very different Tinder profiles, as we dressed him up in a leather jacket to become the rocker, styled his hair and plucked his brows to become metrosexual and got him working out to be the gym buff.

The same amount of ‘right swipes’ per day for a 2 week period and Tinder had spoken, leaving us with a unanimous decision that will shock some – and be no surprise to others. It’s time to find out your most eligible stereotype… 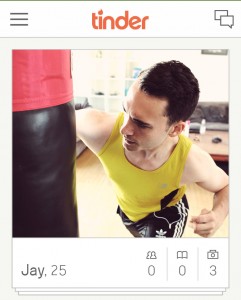 Surprised? We definitely were – because firmly at the back of the pack was the Gym Buff! Maybe muscles aren’t as appealing as we’d previously thought? Or maybe it’s because a photo of him punching something didn’t really sell the love, romance or passion you might be swiping Tinder in search of?

The relationship expert Caroline Brealey gave her thoughts on him: “For some women, knowing that they come second to the weights, treadmills and cross trainers will be a hard fact to swallow… A major pitfall of the relationship for a woman that doesn’t have this interest as she may seldom see him for the gym, and won’t particularly savour the time spent with him being taken up with talk of the gym”. Although she did add that on the other hand, “A relationship destined to work is with a girl that takes care of her appearance, values eating well and prioritises fitness… and of course wants something good to look at, with her benefitting from his good looks, energy in and out of the bedroom and that drink fuelled nights and hangovers will be a rare occurrence”.

Getting another insight, psychiatrist Dr Lars Davidsson of the Angelo Europeon clinic agreed saying “The women searching on Tinder could have been put off because why would they want to build feelings for someone who in the end will have little time for them? Gym buffs can also come across as being self-obsessed”. Hmmmm! 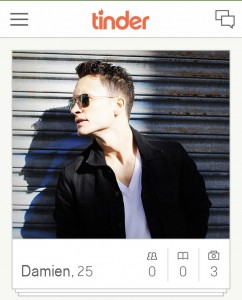 Rock music hasn’t topped the charts in years, so it’s not really much of a surprise that in 2014, the rocker type experiences a hard time on Tinder – showing a true sign of the times and the way pop culture is going with its leanings towards the preened quiffs of X-Factor and razor-sharp eyebrows of TOWIE…

Although from a relationship and psychiatry point of view, it goes much deeper than that, with Caroline starting off by saying “females with a tendency of getting bored easily could grow tired of his brooding, moody, ‘too cool for school’ exterior”. While according to Dr. Lars Davidsson, “the rocker puts very little thought into his appearance and has traits of ‘not caring’ that show through in the images, he is already at a disadvantage on Tinder. What woman wants a man that doesn’t care? Furthermore, interests such as music can be seen as more introverted and not socialable, which of course results in a bad date”. 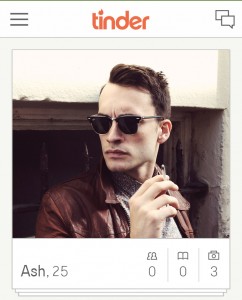 Moving into the medal positions now and in third place is one of the newest and most notable stereotypes out there: the Hipster. Before running the test, many of us inside the Fizzbox office hypothesised that the hipster would come out on top because of the fact that we ran it in Brighton and that it is a place which is definitely more ‘falafel than fries’ and quite possibly the only place in Britain where seeing someone riding a Penny Farthing wouldn’t be that much of a surprise.

But no, we were wrong, and maybe it was his smoking habit that put so many Tinder-swiping women off? Caroline our relationship expert who also founded Mutual Attraction, an award-winning dating agency had this to say on the subject: “I think smoking is a huge turn off for a lot of people. Personally speaking, at Mutual Attraction I can count on one hand the people who have ticked the box ‘open to meeting a smoker’. After all who wants to snog someone who tastes like an ashtray?”

Whereas on the more positive side of things, Dr Lars Davidsson said “the Hipster possibly placed highly as he is seen as more of an interesting or intellectual date than the other stereotypes… and therefore could provide good conversation on the first date. It is this intrigue and need to be interested that could have resulted in the ‘right swipe’”. 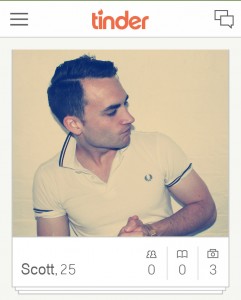 Stomping in at second place comes the loud and proud ‘lad’, sporting his Fred Perry polo and is probably about to march on down to watch the footy with his mates. By far the most traditional ‘man’s man’ out of all the stereotypes , was this why he ranked so highly in Tinder? Dr Lars Davidsson definitely thinks that could be the case, stating “It has been shown that women will choose a partner who shows similar traits to their father, and being more ‘traditional’ mirrors this with the archetypal lad, as he is possibly more similar in style and interest to many fathers out there in this generation”.

Deep stuff… and Caroline also added that “it isn’t all glugging beers and chanting at the football, because also very close to him is his family, with him behind all the bravado most likely being a bit of a Mother’s boy, holding him in good stead if you are looking for a family of your own”. In that light making the lad more of an eligible bachelor, but not as eligible as… 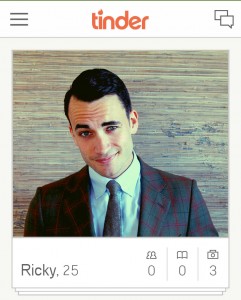 But wouldn’t women rather avoid the metrosexual because he would monopolise their bathrooms and steal their cosmetics? Well not as much as you may think, with Caroline pointing out that “while this might on the face of it this may appear to be a pitfall of dating a metrosexual man, it may actually be a blessing, with this attention to detail flowing from the mirror through to every facet of his life – making him an attentive boyfriend that will do all the little things, from taking your coat to buying you sentimental, thought out gifts. Pair that with his looks and charm and you’re on to a winner!”

And win he did! In the words of Dr Lars Davidsson, the women are simply “drawn to what looks best” – with the metrosexual spending time to look good as the defining factor of what he is all about.

What do YOU think? Would you have went for the metrosexual or would you have swiped right for another stereotype? We ran the test but the conversation continues… have your say in the comments below!