Join us for a day that celebrates Bridesmaids!

The women that don't get enough attention at the wedding: The Bridesmaids!

National Bridesmaids Day takes place on the 25th of March every year. It celebrates those among us who have had the honour to be part of their friend’s special day. 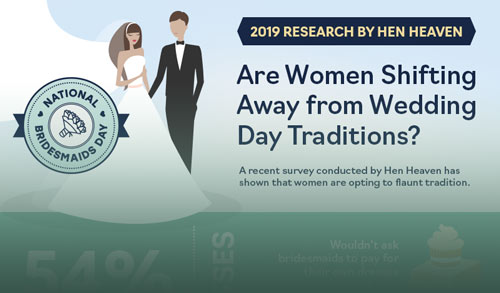 Fizzbox wanted to make sure that every year there is a time to reflect on these women who support the bride, make sure everything runs smooth on the big day, and also looks glamorous in matching dresses! So, we teamed up with Butlers In The Buff and created National Bridesmaids Day. Now there is no excuse to forget about the bridesmaids! 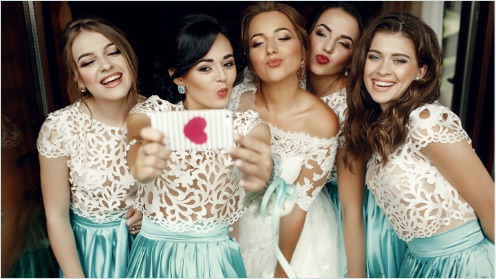 A thank you to Bridesmaids!

With over 15 years of experience in helping out Bridesmaids with their hen related duties, we know that Bridesmaids deserve a real day of celebration, letting their hair down and the ability to have life made that bit easier for them. So here it is, the day of relaxation and reward: National Bridesmaid Day! Make sure to mark the date on your map every year from now on.

The history of bridesmaids allegedly goes all the way back to the bible and the story of Jacob. His two wives Leah and Rachel literally came with maids as staff. The tradition of wearing the same dresses is just as ancient being a practice to try to trick any jealous parties or confuse evil spirits!

In particularly more brutal times healthy brides were valuable commodities and being kidnapped during a wedding was not unheard of in places like tribal China. This resulted in maids wearing the same clothing as the bride to confuse and help her not be identified amongst the congregation.

Luckily nowadays bridesmaid play a more ceremonial role rather than being expendable body doubles! Instead of being servants, bridesmaids are also now friends of the bride performing a similar role as ushers, but for the brides side of guests.

Bridesmaids also play a vital role of organising the hen weekend and on the 25th March they are at their busiest planning out the last weekend of freedom for the bride.

The cost of an average hen party in the UK per person.

The year in which the phrase “often a bridesmaid, but never a bride” originated from a mouthwash advertisement.

The universally known bridesmaid’s curse: “thrice a bridesmaid, never a bride” can be broken by being a bridesmaid this number of times.

The role of a bridesmaid

originated centuries ago when friends of the bride would dress the same as the bride in order to confuse evil spirits who were ready to snatch the bride away from her intended.

The number of hen parties in a year.

The average woman, between 25 and 35 years old, will go on this many hen parties in her life.